We started off the day early and determined to see as much of the city as we possibly could. Thankfully, the grid system made navigating pretty easy, and so we were able to find most of the monuments and buildings with relative ease. 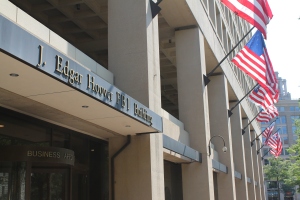 The first building we came to was the FBI headquarters, also known as the J. Edgar Hoover Building – after its founder. Apparently you used to be able to do a guided tour of the building, although this sadly stopped after 911.

We passed by a number of famous buildings, including the National Archives – which I visited again later in the day. We continued to the US Capitol, which was sadly having building work done to it. It was slightly disappointing I must admit, as it meant that I wasn’t able to get the photos I wanted. It was still an incredibly impressive building however. Since 1800, this building has been the location of the legislative branch of American government (Congress), which writes the countries laws. Standing there, it was strange to think how the building standing in front of me has helped to shape American history and culture for the last two hundred years.

From the Capitol we then began to walk along the National Mall. I have to admit, when I first heard that name I was slightly confused. After all, when hearing ‘mall’ my thoughts automatically go to a shopping centre. But no, the National Mall – also known as ‘America’s Front Yard’ is a 1.9 mile stretch of grass from the Capitol to the Lincoln Memorial. Museums and memorials line the Mall, and thus if you only have one day in Washington, I would definitely recommend spending the day in this area as it’s a fantastic place to see numerous sights in a short space of time. 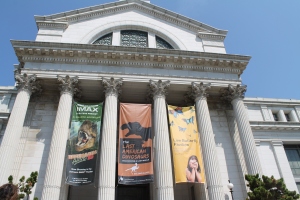 We walked past numerous museums that I would like to explore if I’m ever in Washington again. Sadly, because we only had one day in the city, I had to make the decision to not go in them, and to see the most famous monuments instead. The Museum of the American Indian, the Air and Space Museum, and the US Holocaust Memorial Museum are all going on my list of things I still need to do!

I couldn’t resist going into the Museum of Natural History for a quick look though. I particularly wanted to see two things mentioned by my Lonely Planet Guidebook – Henry, the elephant who guards the entrain of the museum, and the Hope Diamond. Also known as ‘Le Bijou du Roi’ (‘the King’s Jewel), this is a deep-blue, 45.52 carat diamond that legend says curses its owners. A number of its owners committed suicide, were murdered, executed, tortured, imprisoned, ‘torn to pieces by wild dogs’, abandoned by their lovers or financially ruined. So whilst I myself don’t believe in curses, I can perhaps see why such a rumour came about. One thing was definitely true however, the diamond was undeniably beautiful, whatever effect it may or may not have on its owners.

We continued on our way down the Mall until we reached the World War II Memorial site. This site can be found at one end of the Reflecting Pool, and is also the only War Memorial to have the destination of being at the centre of the Mall. It commemorates not only the 16 million American Soldiers who served in the war, but also the the 400,000 American who also died.

I think that it is a beautiful memorial. Elegantly simple, it is a touching monument to those who lost their lives. The memorial was opened to the public on April 29th 2004, and was dedicated on May 29th of the same year. A central part of the Mall, it is somewhere that I think everyone should spend a few moments of their time walking around. 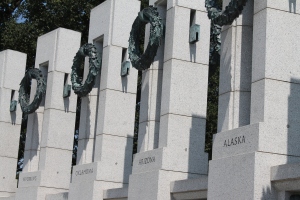 Just passed the memorial is the famous Reflecting Pool, at just over a third of a mile long it is the largest of a number of reflecting pools in DC. The reason for it’s name is pretty self explanatory, although I did find it cool that exactly what it reflects depends on where you stand in relation to it. The pool was constructed in 1922 and 1923, designed by Henry Bacon. The views around the pool – and in particular at either end of the pool – were stunning, and seeing this iconic structure in person was an amazing experience.

The final part of the mall we saw was, of course, the Lincoln Memorial. I don’t feel like it really needs to be explained that this is a monument dedicated to Abraham Lincoln, the 16th president of America. The building is designed in the form of a Greek temple, enclosing a large seated sculpture of the president. It was dedicated in 1922, with the primary statue being designed by Daniel Chester French. Since the 1930s this has been a symbolic centre focused on race relations. On August 28th 1963 it was famously the location of Martin Luther King’s ‘I Have a Dream’ speech. This is yet another American monument which I have grown up knowing about, seeing on television and in the cinema. To actually stand in front of the towering statue, and to turn back and see such a beautiful view, was truly awe inspiring. Part of me could not quite believe that I was actually there, that I had seen all of these incredible sights. Whilst the walk may have been hot and tiring, it was 100% worth it, and I am so happy that we made the effort to see all of these historic monuments.

Sadly, there is no picture for the last part of my day. After the Lincoln Memorial we went for a quick lunch, and then the others decided to go and do some shopping. I on the other hand, decided to be a true geek and head back to the National Archives. It’s free to enter and there were two documents displayed there that I wanted to see – the Declaration of Independence, and one of the last four remaining copies of the Magna Carta. I am so pleased that I had the opportunity to see two such important documents, and whilst it may not be on everyone’s list, I still think it’s something worth seeing!

“Travel makes one modest. You see what a tiny place you occupy in the world.” – Gustave Flaubert