Well anybody who visits Vietnam must see one thing in particular – the water puppet show!

A little bit of history about the show. Water puppetry dates back to around the 11th century in Vietnam. It’s thought to have originated in Northern Vietnam in villages along the Red River Delta. The tradition started when rice paddy fields became flooded and villagers would produce their own entertainment.  The villagers would stand in waist-deep water with their puppets on long bamboo poles, performing shows to the rest of the village. Whilst puppetry may be a traditional art form in Asia, Vietnamese water puppetry is a unique version of it! 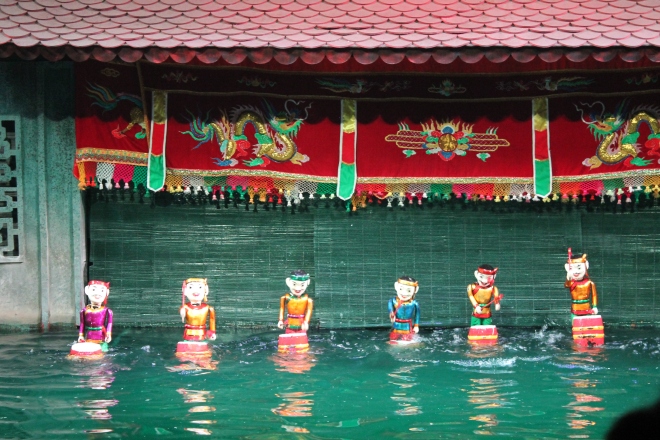 The show is, in my opinion, a definite must for all visitors to the country! Watching in English does have the downside of not understanding the musical lyrics, or the plot lines for the individual puppets, and going from the reaction of the local audience members, it seems that there are often jokes which you miss. But really, that doesn’t matter. Experience traditional Vietnamese music live is amazing and for the most part you can either guess what is going on in the show or it doesn’t really matter. You can simple sit back and enjoy a show totally unlike anything you have ever seen before! Even though this was my second time seeing the show I stilled loved every moment, and it’s definitely something that can appeal to all age groups.

“The real voyage of discovery consists not in seeking new landscapes, but in having new eyes.” Marcel Proust