Before I came back to New York again, I decide that I would buy a ticket for a bus tour. I’d done a lot of walking in the couple of days I was here previously, and a bus seemed like an increasingly appealing idea. Partly I admit, because of laziness, but also because it would be nice just to sit back and enjoy the city without constantly having to look at a map to work out where I was meant to be going! I decided to go with the GoNY bus (the green one, for anyone who’s done a bus tour in NYC).

The reason I decided to go with this bus company is because they did a really good deal. A normal tour for say, the Downtown area, costs $34. Same with their Uptown tour. They also had a night time tour, a Brooklyn tour, a Downtown Liberty Cruise, bike rental in Central Park for an hour, and tickets for the Museum of the City of New York. Now, you could choose to do any one of these things, or you could choose to do all of them for $54 (apparently saving $129). You could also have 72 hours to do all of them. This seemed like a pretty fab deal, and they also have a very good map which shows you exactly where each of the buses go, where they stop, which attractions they stop by and what else is in the local area. I essentially felt that it was good value for money and that they were well organised.

I started off my day by doing the Downtown Liberty Cruise. This took us underneath the Manhattan Bridge and Brooklyn bridge, along the coastline of New York, and then to the statue of Liberty. I really enjoyed the trip. The guide was very entertaining and gave us a lot of information that was actually pretty interesting. He also seemed approachable, so a lot of people asked him questions. We saw some amazing views, and we stopped for a good amount of time next to the island so that we all had time to get as many photos of the statue of Liberty as we wanted. The guide was very good at offering to take photos for families or groups as well.

The company provides a shuttle bus going back and forth to the Pier for the boat. The only slight issue for me was that I decided to meet them there as it made more sense considering the location of my hostel. I ran into a slight problem as I couldn’t find the pier initially and had to wander around for about 10 minutes asking if anyone knew where it was (turned out I had walked straight past it). The issue came from the fact that I was expecting some sort of big company sign, and instead you had to walk around the back of what looked like a storage facility. Admittedly, it did have a sign saying ‘pier 36’, but as I already mentioned, I had been expecting a big green ‘GoNY’ logo so hadn’t even noticed it! So a word of warning for anyone planning on meeting the company there – pier 36 is quite easy to miss so keep your eyes open! 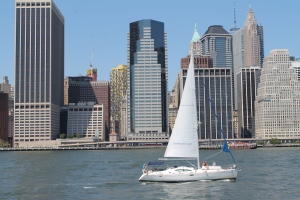 ‘Not until we are lost do we begin to understand ourselves.’ Henry David Thoreau